3 Star average (the first two-thirds of the book was a solid 4 stars…the last third a sad 1.5 stars)

Romy Silvers is the only surviving crew-member of a spaceship travelling to a new planet, on a mission to establish a second home for humanity amongst the stars. Alone in space, she is the loneliest girl in the universe until she hears about a new ship which has launched from Earth – with a single passenger on board. A boy called J.

Their only communication with each other is via email – and due to the distance between them, their messages take months to transmit across space. And yet Romy finds herself falling in love.

But what does Romy really know about J? And what do the mysterious messages which have started arriving from Earth really mean?

Sometimes, there’s something worse than being alone . . .

What would you do if you were alone, utterly and completely alone, in the emptiness of space? Isolated beyond comprehension; no one to come to your aid if something goes wrong, no one to help you if you are sick, no one to provide any kind of comforting touch, but worst of all, no hope that your situation will ever be anything but this…until, suddenly, someone is coming.  These are the questions Lauren James examines in The Loneliest Girl in the Universe.  Part science fiction and part psychological thriller—with a healthy dollop of teen angst thrown in—Loneliest Girl is absolutely wonderful…for the first two-thirds (I’ll get to that last third in a minute).  I’m going to keep this review spoiler free, so it will be fairly vague, but I will include my full thoughts/rant in the spoiler section at the end (don’t worry, I’ll give you a warning first).

James begins her story in epic fashion with a quote from one of the best short stories ever written, “The Yellow Wallpaper.”  Written by feminist Charlotte Perkins Gilman in 1892, “Wallpaper” is one of the most influential pieces of early American feminist literature.  The story acts as a metaphor for 19thcentury views toward women’s mental and physical health by depicting a woman’s slow descent into madness in the midst of her total isolation.  I literally squealed when I saw this quote and buckled in for the wonderful ride I was sure would follow.  It’s probably unfair for me to compare James’ work to Gilman’s, but when you put something like that at the beginning of your book you are practically inviting comparison.

The dark, blunted shadows hold me under the duvet where the childlike safe place in my brain says they can’t find me.  The shadows dart and swell across the room and all I can do is watch them creep closer.

For the most part, James holds her own; Loneliest Girl reads like a YA sci-fi version of “Wallpaper” complete with all of the dread, uneasiness, and tension one would expect. I stayed up into the wee hours of the morning to finish the book, and several times I found myself staring uneasily at the shadows of my bedroom (my 6 month old sleeps in my room, so I was reading by a tiny book light).  James creates an environment in which the MC—Romy—can’t trust herself, and so we can’t trust her either.  Is she insane?   Are the ghosts of her past coming to get her?  Is the mysterious astronaut coming to her aid or are his intentions more sinister…or is he even real?  I truly wasn’t sure throughout the first wonderful two-thirds of the story, and that makes the terrible ending even more disappointing.

As far as characters go, Romy is great.  She is fully fleshed out and relatable, and I found myself rooting for her throughout (even in the abysmal ending).  She is intelligent and resourceful, and also achingly naïve, but how could she not be? She has grown up almost totally on her own with only entertainment media to show her how the world works.  James paints an interesting picture of how a teenage girl would view society and societal roles if the entertainment industry were her only guide.  Several reviews have complained about sexism within this book, especially when Romy tries to “ready” herself for J.  She shaves her legs, makes a twirly dress, and thinks about how best to make herself soft and feminine i.e. what she thinks is beautiful.  Rather than see this as sexist, I think James is making a point about how the media—and society—portray female standards of beauty. In another instance, Romy explains that J must not be lying to her about his looks because only ugly people lie. Well, if you had been raised almost exclusively on pop culture you would probably believe that, especially at 16 years old.  Rather than sexist, this is part of James’ feminist message.  The themes of this book are all overtly feminist: the internalization of female beauty standards, the danger of expecting a man to save you, and, finally, finding your own inner strength and resilience.  James does this somewhat subtly, but successfully, and it is unfortunate that it is mostly being overlooked. 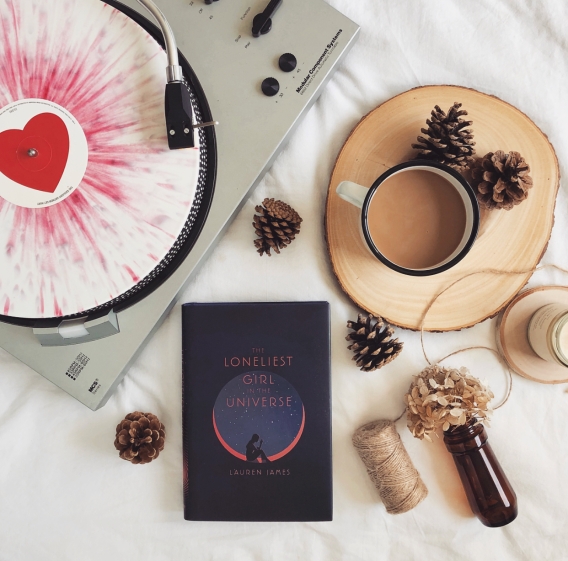 Once J is here, all my problems will disappear.  I just have to hold on.

The format of the story is great and lends itself to the intimacy needed for this type of story to work. I felt as isolated as Romy, with her panic and anxiety becoming my own.  At times, her terror was palpable, and I so desperately wanted to reach through the pages and give that poor girl a hug (and sometimes a swift kick in the ass). The first person narrative allows the reader to get into Romy’s head, but it also makes her our only source of information…a source that might not be entirely trustworthy.  The format adds to the feeling of dread and isolation, and it is a credit to James that she does it so well.

A few other things that I loved before we get into the ending:  James talks about menstruation!  I get so tired of reading books with a female MC and none of them ever mention their periods.  It was refreshing.  Romy’s questions about sex were also wonderful and so delightfully perfect.  I laughed out loud and woke up my baby, but it was worth it.  Both of these examples ground the story in a realism that is necessary in a book where the reader doesn’t know what—if anything—is real.

I’m sure I can hear someone coming.  The low grinding sound has shifted into the echo of footsteps, progressing down the corridor in a steady, unhurried march.

Ok, the ending.  I can’t say much without giving away everything, but I will say that it was the one ending that I didn’t expect…because it’s dumb.  It’s a cheap twist that felt like a lie.  At one point I put down the book and almost didn’t pick it back up.  After such a smart tale, the end feels like a condescending pat on the head.  To be even more blunt, the end is a cop-out and a bit cowardly.  I’ll go into greater detail/rant mode in the spoiler section if you are interested or would like to commiserate with me.

This book leaves me conflicted: do I recommend a book that is so wonderful for the majority or do I tell you to avoid it because the end is lame?  I’m going to go ahead and tell you to check it out.  I hated the end, but some people are going to love it, especially if you enjoy clear endings that are tied up in a pretty bow.  Even if you hate the ending as much as I do, the rest of the book is fantastic enough (and a quick enough read), to make it worth it.

What do you guys think?  Do you recommend a book if the ending is horrible and, if you do, do you add a caveat or let them make up their own mind?

If you would like to partake of my annoyance, simply click the arrow to reveal the spoilers!