Nina and her twin sister, Artemis, are far from normal. It’s hard to be when you grow up at the Watcher’s Academy, which is a bit different from your average boarding school. Here teens are trained as guides for Slayers—girls gifted with supernatural strength to fight the forces of darkness. But while Nina’s mother is a prominent member of the Watcher’s Council, Nina has never embraced the violent Watcher lifestyle. Instead she follows her instincts to heal, carving out a place for herself as the school medic.

Thanks to Buffy, the famous (and infamous) Slayer that Nina’s father died protecting, Nina is not only the newest Chosen One—she’s the last Slayer, ever. Period.

As Nina hones her skills with her Watcher-in-training, Leo, there’s plenty to keep her occupied: a monster fighting ring, a demon who eats happiness, a shadowy figure that keeps popping up in Nina’s dreams…

But it’s not until bodies start turning up that Nina’s new powers will truly be tested—because someone she loves might be next.

One thing is clear: Being Chosen is easy. Making choices is hard.

I’m going to let you guys in on a little secret shame of mine…I didn’t like Buffy the Vampire Slayer when it first came out.  In fact, I was so irritated with it that I refused to watch it.  No matter how many people told me it was amazing and everything I would love, I steadfastly refused to even give it a cursory glance. Surprised?  Allow me to explain.  You see, the Buffy television show was not, in fact, the first Buffy incarnation. That would be the Buffy movie that came out in 1992.  Was it good? Not really.  Did I love it?  Oh, Dear Reader, I loved it so very, very much.  I was only a wee babe, but I saw it and I loved it and it changed me forever…and then the tv show came out with new people and I was pissed.  It took my best friend at the time showing me an article from Mr. Whedon himself explaining why he did the show for me to FINALLY watch it.  Of course, to know one’s surprise, I immediately became obsessed, and now both movie and tv show are forever etched on my little black heart.

I wanted to give you all of this backstory to explain why I was both excited and hesitant to read Slayer. Yes it was Joss Whedon approved, but that still doesn’t mean that I’m going to like it.  I felt much more mollified after reading The Dark Descent of Elizabeth Frankenstein last October (Kiersten White’s previous book) because that book is wonderful.  Seriously, so good.  You should read it.  Anyway, how White treated and portrayed some of the most well known and timeless characters in literature was so spot on and done so well that I became much more excited to see how she would treat characters in the Buffyverse…and, for the most part, my faith was rewarded.  Let’s jump into it, shall we?

First rule in the Slayer handbook?  When in doubt, hit something.

Jumping into the Buffyverse is no small feat, and it did take White a minute to find her voice and her footing in such a dynamic and well established world, but once she does the book works.  The tone and mood of the book are good: there is gravity, sarcasm, humor, angst, family drama, and a bit of tension…all the things you want in an episode of Buffy. White’s new characters feel fleshed out and realistic, and they definitely add to the established canon without feeling extraneous.  Speaking of the established canon, White doesn’t mess with it (let’s all cheer!), and she actually brings it up quite a bit; a few of our favorites made small appearances too which really helped to ground me in the established universe rather than feel like I was in a new one.  In a smart move, the fan favorites never over stayed their welcome, and so they never felt like they were intruding on the new characters and storyline.  Overall, White does a fantastic job of integrating her story into the Buffyverse, and her characters feel like they belong there.

Being chosen is easy. Making choices will break your heart.

One of the aspects that I really enjoyed about this book are the various themes White focuses on, but especially the emphasis on choice and choices.  What does it mean to be chosen, what does it mean to choose, and can you have/do both?  Buffy explored these ideas as well, but they play out differently in a world in which there isn’t just one Chosen One, but many.  White explores these questions rather well and in a way that doesn’t feel preachy or over done but also doesn’t shy away from depth…again, just what you want in a Buffy episode.  The book also continues to study many of the themes Buffy was built on: the gravity of killing/violence, good and bad not being black and white, family dynamics, the need for a Scooby Gang, etc.  All of them are done well and with care, and I look forward to White building on them in the next book.

Having said all of that, the book did have some issues for me.  The pacing was a bit erratic, and sometimes way too slow, due to a near constant stream of inner monologue that covered the same ground over and over…and over again.  Listen, I get it, the MC is an angsty teen going through some crazy shit, so of course there is going to be a ton of inner turmoil…but we don’t need to have the turmoil rehashed in every chapter.  The MC doubts herself?  Got it. She has mommy issues? Got it. Everything has gone to crap and she is having trouble coping?  Cool, I would too, but I don’t need to hear about it every few pages.  I think if some of this inner monologue had been cut out the book would have flowed better, been a nicer length, and I wouldn’t have had to skim so much. 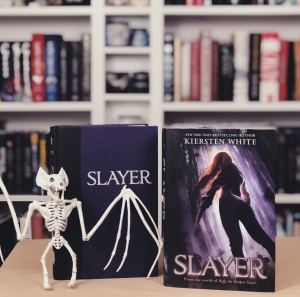 The big “mysteries” of the book were also fairly predictable (except for one…and that one was a doozy), but I’m not as upset about that as I normally would be in a story because Buffy was never exactly shocking either (but when it was…watch out!).  The book has the same formula Buffy had (and most tv shows do): the mystery of the “episode” is solved, but the overarching mystery/problem is set up for the next installment.  It’s a tried and true formula, and White doesn’t stray from it.

Of all the awful things demons do, keeping Latin alive when it deserves to be a dead language might be the worst.To say nothing of ancient Sumerian. And ancient Sumerian translated into Latin? Diabolic.

Lastly, and this is partly my fault, I was a little irritated by the mention of beloved character’s fates with no explanation.  For instance, one extremely beloved character is casually mentioned as being dead….and that’s it.  Just in the middle of a sentence, “such and such is dead though” and then the characters move on.  I’m assuming this character’s fate is common knowledge for those who have read the Buffy comics (they act as a continuation of the tv show), but for those of us who aren’t in the loop some explanation would have been nice.  Maybe White will explain more later, but either way it was rather jarring and took me out of the story totally.

Overall, Slayer was mostly what I was hoping it would be: a spin-off episode of Buffy with new characters and guest appearances from the Scooby Gang.  White did a great job of creating a story and characters that feel at home in the Buffyverse but that still stand on their own.  She also does a great job of laying the groundwork for the overarching “big bad,” and I personally cannot wait to find out more about that mystery.  I hope that White doesn’t make us wait too long for the next book because now that my Buffy is back I need much, much more.