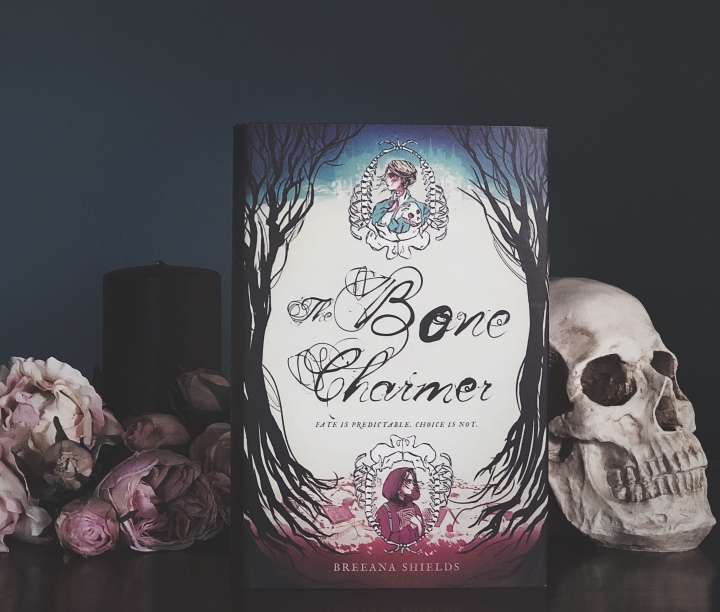 Sliding Doors, one of the most underrated and overlooked rom coms of the 90’s, is based on the idea that a small chance event—missing a train, for instance—can irrevocably change the course of your life.  The movie explores the idea by showing its leading lady live through the two parallel timelines that were created by her chance event.  It’s a fun and oh so very 90’s movie that nevertheless requires its viewer to consider certain rather heady life questions: how could my life be different? What if what I want isn’t what is best for me? How will I know?  Breeana Shields, the author of The Bone Charmer, must be a fan of this movie as well because her book explores many of the same ideas and follows a similar structure. In Shields world, however, everything is decided by the bones of a deceased loved one…so Sliding Doors, but with considerably more bones and dead people.

The Bone Charmeris one of those rare books that left me feeling more than a little conflicted. On the one hand, it’s a well-written and fun book that I enjoyed very much and devoured in a just a few days. It’s got a killer concept and beautiful prose, and I found myself anxious to get back to it when I had to put it down.  On the other hand it’s an acutely flawed book that left me feeling frustrated and semi-underwhelmed, which is a fairly annoying place to be in when finishing a book. Let’s jump right in, shall we?

Tomorrow my future will be determined by my dead gran’s finger bones. It’s how my whole life has been determined—with bones and blood and snapping flames.

Let’s start with the aspects of the book that didn’t work.  First, the utter lack of world building is infuriating.  I know next to nothing about this universe, how it functions, and the people that reside in it.  Is this the only country in this universe?  If not, how does this country work in relation to others?  Do other countries have magic?  Why do only some people have magic?  I have no answers to any of these questions.  I’m not even sure what the people in this world look like, what they are wearing (other than cloaks, they are always wearing cloaks), the style of architecture, etc.  Are the roads paved?  Do they ride horses or just walk?  They have boats, but do they have any other modes of transportation?  What is the extent of their technology?  I kept waiting for something to be described for more than a brief sentence (if at all), and I kept coming up with nothing.  I get irritated with books that spend too much time on set dressing, but at least they give you something to go on.

The character building is another rather weak point in the story.  We learn the most about Saskia—our MC—but even what we know about her is fairly limited.  The other characters either have murky and unclear motivations/backgrounds, or they have none at all and they feel totally extraneous.  So much of the story revolves around Saskia and her mother, but by the end of the story her mother felt more like an afterthought than an incredibly important character.  The Big Bad was also not fleshed out in any meaningful way, and his motivations felt so shallow as to be nonexistent.  I’m assuming some of this will be built on in the next book, but their needs to be at least some foundation for them in book one.  One character in particular (who I won’t name due to spoilers) was incredibly important to the story, and yet had absolutely no character building or motivation at all.  It wasn’t so horrible as to make the book unreadable, but it does make the story feel shallow and unfulfilling.

Masons craft the bone flutes that Watchers use to control animals and the weapons that Breakers use to protect our country. Mixers blend bone potions that Healers use to treat patients. And, of course, Charmers perform readings on us all.

Having said all of that, I still truly enjoyed the story, which is a testament to how lovely the writing is and the strength of the concept.  The magical system is intricate, unique, fun, and more than a little creepy (which I’m all about), and I’m hoping it is explored more in book two. The fantasy genre, especially within YA, is saturated with magical systems of all flavors, so to find one so unique and well done was quite a treat. I was equally impressed that I found myself rooting for both of Saskia’s timelines, and I was genuinely concerned for the people in each of them.  Creating two separate and vastly different timelines that the reader is invested in is no small feat, and Shields pulls it off remarkably well. It’s so disappointing, then, that the other aspects of the book were so lacking because if it is this engaging then think of what it could have been like with world building and character arcs.

Overall, I did enjoy this book, and I might even read book two, but if the lack of world building and character arcs aren’t addressed I don’t think the concept can carry a second book, and Shields house of bones will collapse under its own weight.