In an alternate world startlingly close to our own, humans have nine lives—and they can’t wait to burn straight through them.

As you shed lives, you shed your awkward phases: one death is equal to one physical and mental upgrade. Julian’s friends are obsessed with the idea of burning lives, but Julian is determined to stay on his first for as long as he can. His mother, the ultimate cautionary tale, burned through her first eight in just a few years, and Julian has no intention of succumbing to the debilitating rebirth sickness that she inflicted on herself.

But the regime has death incentives aimed at controlling overpopulation, and Julian realizes that he’s going to have to burn at some point—especially when he becomes a target for Nicholas, the manipulative leader of the Burners, the school’s suicide club. And when Julian eventually succumbs, he uncovers suspicious gaps in the rebirth system that may explain exactly why his mother went so far down the rabbit hole years ago. Along with a group of student dissenters, Julian sets out to find answers and is soon on the verge of exposing the greatest conspiracy ever unleashed on the world.

He has just eight more lives to uncover the brutal truth.

After reading Nine, the debut offering of author Zach Hines, I googled the question “what is the value of human life?”  Now, don’t get me wrong, I have my own answer to this question—as I’m sure we all do—but I wanted to see the popular consensus.

Predictably, most of what the all-knowing Google supplied as an answer were pages upon pages of articles, essays, and commentaries debating moral and ethical topics revolving around my original query: is one life valuable or is human life only valuable when thought of in terms of humanity?  Is a human life inherently esteemed or does a person have to earn it?  What makes someone’s life valuable?  Is it actually valuable at all?  Essentially, Google had supplied me with nothing more than additional questions because a consensus on the value of human life simply does not exist (the one notable exception being a 2017 article from The Globalist that puts the value of a human life around six million dollars…so that’s good to know I guess?).  Now take that question, but instead of humans consuming one life each replace it with nine…does that change the answer and, if it does, how does it change?  The examination of those questions is the central premise around which Nine revolves and, let me tell you, it’s certainly not easy or light.

The world that Mr. Hines creates is a dystopian reality that is unsettling similar to our own, but I hesitate to categorize this book as dystopian; although I wouldn’t categorize it as sci-fi or fantasy either.  It’s a book that lacks definition, and that is part of the reason it works so well. Hines doesn’t push the story too far in any given direction, and as a result the alternative reality feels grounded and relatable.  We aren’t stepping into a far removed alien planet or some random fantasy realm, but instead we are staying firmly planted in a reality that all of us know well. This grounding adds gravity to the moral questions that Hines poses and provides a definitive weight to the characters plights that many YA books lack.  You won’t find many flights of fancy here, but you will find lingering questions that are more than slightly unsettling.

Growing up, like burning, wasn’t a choice.  It was always there, waiting to happen to you.

My favorite aspect of Nine is how well Hines fits social commentary into his story.  The bureaucratization and subsequent monetization of death is handled deftly and intelligently and is arguably the most terrifying aspect of the story.  It feels all too real and believable, especially in the current political climate.  More than just that, Hines also uses his story as an allegory for climate change, social injustice, the misuse of resources, and the destruction of innocence and youth to varying degrees of overtness.  It all comes back to control and power: who has it, who wants it, and what happens to those without it.  I was shocked when I learned that this is Hines debut novel because he truly does such a wonderful job of integrating these topics into his story without it feeling preachy or overdone.  This book can be read on a fairly surface level, but the reader can also take a pretty deep dive, which is a credit to Hines writing. 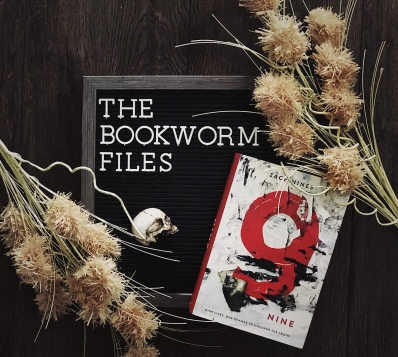 Now for the benchmarks of any good review: characters, plot, and pacing.  The pacing of the story is good, and I never felt like the story was being bogged down in one spot or another.  Nine starts with a disconcerting bang and keeps a fairly brisk pace from there.  The characters are given enough backstory to be relatable, and they each have their own character arcs that make sense.  One of my biggest pet peeves are characters that lack motivation for their actions, so I was relieved to find that Hines doesn’t make that particular sin here. All of the characters are clearly motivated and their actions make sense within their own circumstances.  Finally, the plot is equally as well done, and I really was (mostly) guessing until the end game was revealed.  Most of the books I’ve read as of late have been tediously predictable and tropey, so Nine was a breath of fresh air.  An ending that isn’t totally predictable, and a total lack of YA tropes?!  Oh yes, you read that right.  Well done, Mr. Hines.

Julian had no idea what it meant to die.

Ok, I do have one fairly large beef with this book:  I need more. The world building is vague, but—for the most part—I understand it and I’m ok with it.  Our world doesn’t always have explanations for the things that happen, and I’m ok with Hines not giving detailed reasons or rationalizations for everything.  Calling the event that gave everyone nine lives the Summer of Storms and leaving it at that is fine with me; I don’t need a deep dive into that phenomenon to understand that it’s just an aspect of this world’s reality.  Having said that, I could have used a little more information about the process of rebirth and how the Department of the Lakes works.  It was easily the most fascinating part of the story, and Hines misses an opportunity to expand on it.

More than a missed opportunity, however, are the rather long loose ends that Hines makes no effort to tie up.  I was incredibly confused when I finished the book to find that this is being sold as a standalone because it seems so obviously written to be part of a series. Perhaps with different characters and in a different place, but definitely continuing in some fashion. Maybe his publishers are waiting to see how Nine performs before committing to more, but if that is the case it does a disservice to the book as certain parts of it don’t fit or simply don’t make sense.

You grab life by the neck and you choke it to death.

Overall, I enjoyed this dark journey that isn’t getting nearly the attention it deserves.  The hype machine missed this one, and it’s truly a shame.  Hines does a great job of leading the reader to where he wants them to go while still allowing the freedom to consider the world he has created.  I flew through this book in just a few days, and I am truly anxious to find out if we will see more from this world.  Be forewarned:  this story is dark from the very beginning and never lightens.  If you enjoy dark and thoughtful YA that doesn’t quite fit into a prescribed category then this is the book for you.  Regardless of whether or not we get more from this unsettling reality, I am oh so curious for what Mr. Hines has in store for us next.

Everything we know about the world keeps changing.  With every passing day, our world is revised into something new…Every minute, every second is a crossroads…The future is, literally, a multitude.  Nothing is normal.

As always, I would love to hear your thoughts!  Have you read this one? Do you want to? Let me know in the comments!