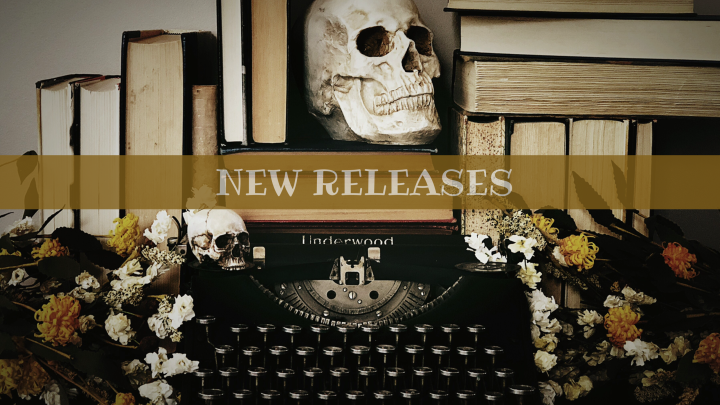 Hello, bookish friends, and welcome back to the New Releases corner here on The Bookworm Files!  This week we sees the release of two sequels (sequels seem to be a theme for August), a book with one of the coolest covers I’ve seen in a hot minute, and one of my favorite reads of 2019.

Sixteen-year-old Skye is done playing the knight in shining armor for her insufferable younger sister, Deirdre. Moving across the country seems like the perfect chance to start over.

In their isolated new neighborhood, Skye manages to fit in, but Deirdre withdraws from everyone, becoming fixated on the swampy woods behind their house and building monstrous sculptures out of sticks and bones.

And when something awful comes scratching at Skye’s window in the middle of the night, claiming she’s the only one who can save Deirdre, Skye knows she will stop at nothing to bring her sister home.

First up, Here There Are Monstersby Amelinda Bérubé and published by Sourcefire Books.  This book caught my attention at BookCon this year with that creepily occultish looking cover, and you all know what a sucker I am for a creepy cover.  On top of that, this book is being billed as the Blair Witch Projectmeets Imaginary Girls, which sounds like a fantastic concept for a book.  While it only has middling reviews on Goodreads so far (3.42), the blurb and cover are enough for me to give it a shot.

In the aftermath of the Third Poppy War, shaman and warrior Rin is on the run: haunted by the atrocity she committed to end the war, addicted to opium, and hiding from the murderous commands of her vengeful god, the fiery Phoenix. Her only reason for living is to get revenge on the traitorous Empress who sold out Nikan to their enemies.

With no other options, Rin joins forces with the powerful Dragon Warlord, who has a plan to conquer Nikan, unseat the Empress, and create a new Republic. Rin throws herself into his war. After all, making war is all she knows how to do.

But the Empress is a more powerful foe than she appears, and the Dragon Warlord’s motivations are not as democratic as they seem. The more Rin learns, the more she fears her love for Nikan will drive her away from every ally and lead her to rely more and more on the Phoenix’s deadly power. Because there is nothing she won’t sacrifice for her country and her vengeance.

Next we have our fist of two sequels for the week with The Dragon Republic by R.F. Kuang and published by Harper Voyager.  This is the follow up to the very critically acclaimed fantasy debut, The Poppy War that combines the real history of 20th century China with gods and monsters. Fans of The Poppy War are loving it so far, and most are saying it not only holds up to but even surpasses the first book.  Just a warning to interested parties: these books are adult and contain some pretty rough descriptions of war and what can happen in war, specifically rape and torture. From what I understand they are brief and happen “off-screen,” but a trigger warning is warranted.

Kazi and Jase have survived, stronger and more in love than ever. Their new life now lies before them―the Ballengers will be outlaws no longer, Tor’s Watch will be a kingdom, and the two of them will meet all challenges side by side, together at last.

But an ominous warning mars their journey back, and in their rush to return to Tor’s Watch, just outside the fortress walls, they are violently attacked and torn apart―and each is thrust into their own new hell.

Unsure whether the other is alive or dead, Kazi and Jase must keep their wits among their greatest enemies and unlikeliest allies. And all the while, Death watches and waits.

For our second sequel we have the very highly anticipated Vow of Thieves by Mary E. Pearson and published by Henry Holt. This is the second half of the Dance of Thieves duology, and is a spin-off of Pearson’s much-loved Remnant Chronicles.  Fans are loving this duology conclusion, and so far it is boasting an impressive 4.45 on Goodreads.  Our very own Tiffany is a big fan and gave the book 4.5 out of 5 stars.

In a manor by the sea, twelve sisters are cursed.

Annaleigh lives a sheltered life at Highmoor, a manor by the sea, with her sisters, their father, and stepmother. Once they were twelve, but loneliness fills the grand halls now that four of the girls’ lives have been cut short. Each death was more tragic than the last—the plague, a plummeting fall, a drowning, a slippery plunge—and there are whispers throughout the surrounding villages that the family is cursed by the gods.

Disturbed by a series of ghostly visions, Annaleigh becomes increasingly suspicious that the deaths were no accidents. Her sisters have been sneaking out every night to attend glittering balls, dancing until dawn in silk gowns and shimmering slippers, and Annaleigh isn’t sure whether to try to stop them or to join their forbidden trysts. Because who—or what—are they really dancing with?

When Annaleigh’s involvement with a mysterious stranger who has secrets of his own intensifies, it’s a race to unravel the darkness that has fallen over her family—before it claims her next.

Finally, we have one of my favorite books of the year, and my favorite fairytale retelling of all time, with House of Salt and Sorrows published by Delacorte Press.  House is the stunning debut of Erin A. Craig and is, in my humble opinion, how a fairytale retelling should be done.  I truly can’t gush enough about this dark and whimsical tale, and if you want to know more I will be posting my full review on Friday. Here’s what you need to know today: stunning cover, excellent MC, creepy, gothic, full of mythology, and goes as dark as you want it to go.  If you only buy one book this month, do yourself a favor and make it this one.

So what do you guys think? Anything catch your fancy?  Have I tempted you thoroughly enough?  Let me know in the comments!