Thanks to Disney and our own ever-pervasive pop culture, the word fairytale conjures childlike worlds full of knights in shining armor, damsels in distress, talking animals, and long nosed witches.  In these worlds, everything is black and white with good and evil playing their clearly defined roles—with good always triumphing, of course. Fairytales, however, are so much more than that.  They are ancient stories that have been passed down through generations.  They are part of a story telling tradition that uses a universal narrative to show us our true selves.  Can you tell that I’m a big fan of fairytales?

Fairytales are one of my all time favorite genres of storytelling, and I am constantly on the hunt for a good retelling.  Sadly, I’ve found so few that I had started to give up hope…until I discovered Erin A. Craig’s glorious debut House of Salt and Sorrow.  This is the dark and atmospheric retelling that my black little heart has been craving, and it is easily the best retelling I’ve ever had the pleasure to read. Based on Grimm’s “The Twelve Dancing Princesses,” Craig has been able to take a beloved story to a place that is both gothic and enchanting.  The story is intricate without being overworked, and grows ever more engrossing as it reaches its climax.  I could gush about this book all day, but I’ll save you all my ramblings and break down a few of my favorite aspects of the book.

I dwelt alone, in a world of moan, and my soul was a stagnant tide / Till the fair and gentle Eulalie became my blushing bride.

First, the atmosphere of House is an absolute triumph.  Craig has managed to walk the infinitely difficult tightrope of whimsical and spooky without veering too far to either side.  The islands, the mythology and religion, the sea creatures, and even the sea itself could all feel suffocating and overdone, but instead add layers to the story that both ground it in reality while simultaneously giving it a fanciful feel.  Highmore Manor—where the bulk of the action takes place—is so fleshed out that it feels like a character itself, and one that can’t fully decide which side it’s on.  Highmore is at once forsaken and opulent; a finely and richly appointed coffin where the ghosts do not rest easy.  All of these pieces combine to form a dark, but never brooding, story that I can only describe as ghastly glamour. 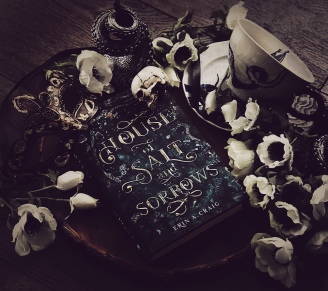 Often, when a book has this much atmosphere and set dressing the characters get the short end of the stick, but Craig has not fallen into that trap here.  All of the principal characters are well done and have clear and understandable motivations. The sisters, especially the youngest, were some of my favorite characters of the entire story.  Craig portrays them so well, that their grief, fear, and innocence are almost palpable.  The MC, Annaleigh, is fully fleshed out and feels grounded in both her time and the story.  She is a strong, intelligent, and curious woman who, nonetheless, still must operate within this ambiguously Victorian world.  Her actions and motives all made sense within the context of the story and the world, and I absolutely found myself rooting for her.

In a manor by the sea, twelve sisters are cursed.

I will warn you, dear reader, that the last quarter of the book strips away the whimsy and gets rather dark.  Craig does her story justice by not pulling back on the horror, and instead goes where the story needs to go.  It’s a place much of YA fears to tread, and why so much YA is lackluster.  Having said that, there is a bit of light in all of this dark in the form of a small and sweet romance.  I’m not always a fan of romance in my books, but it is only a minor aspect of the story and done with a deft hand that adds the touch of hope that every good fairytale (and horror story) needs.  The ending manages to be satisfying while still leaving me wanting more. There is so much unexplored about this world, and I would love to visit it again.

Overall, I adored this book.  Craig has created a magical and haunting story that I already want to read again.  House is equal parts mystery, thriller, ghost story, fantasy, and nightmare all told with beautiful and expert prose: everything a fairytale should contain.  I am stunned that this is Craig’s debut novel, and I for one cannot wait to go along with her wherever she decides to take us next.