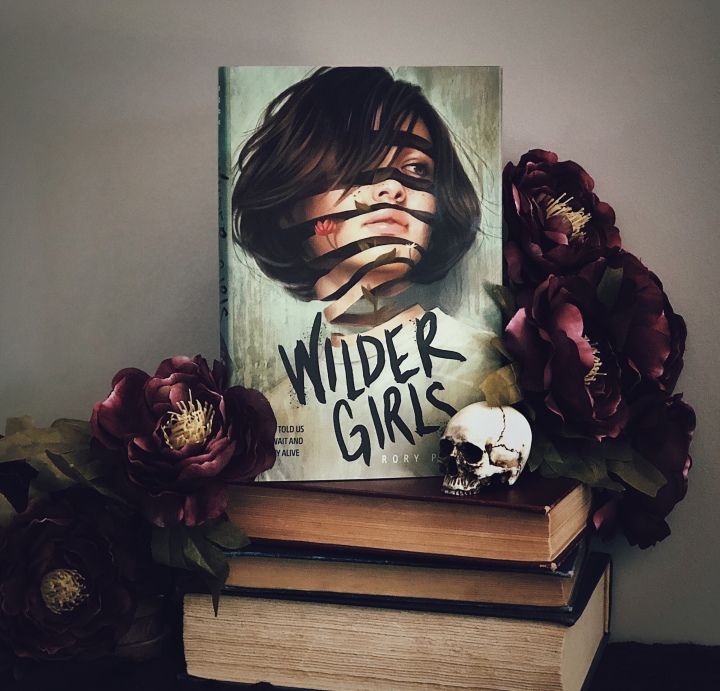 It’s been eighteen months since the Raxter School for Girls was put under quarantine. Since the Tox hit and pulled Hetty’s life out from under her.

It started slow. First the teachers died one by one. Then it began to infect the students, turning their bodies strange and foreign. Now, cut off from the rest of the world and left to fend for themselves on their island home, the girls don’t dare wander outside the school’s fence, where the Tox has made the woods wild and dangerous. They wait for the cure they were promised as the Tox seeps into everything.

But when Byatt goes missing, Hetty will do anything to find her, even if it means breaking quarantine and braving the horrors that lie beyond the fence. And when she does, Hetty learns that there’s more to their story, to their life at Raxter, than she could have ever thought true.

Wilder Girls, the much anticipated debut from Rory Power, has been on my radar since I first laid eyes on that stunning cover, and after reading the synopsis it quickly jumped to one of my most anticipated reads of the year.  Nothing is scarier to me than a virus run rampant, and the idea of being trapped on the island where the disease is ravaging everything lends itself to the kind of suffocating claustrophobia that can make a great story. Add to that the piles of hype the book has been getting for months, and my anticipation and expectation were pretty high.  I started it the day it showed up on my doorstep and finished it just a few days later. Were my expectations met?  Was the anticipation worth it?  The short answer: nope; however, you, dear reader, are not here for the short answer, so allow me to elaborate.

Let’s begin on a positive note, shall we.  It might sound strange to say, but my favorite aspect of the entire story is the part that’s killing everyone.  I loved everything about the Tox virus.  It is creepy, invasive body horror done very well.  The way the virus works, what it does to every living thing on the island, and its ultimate goal are all so disconcerting and strangely realistic. Even though the “big reveal” of the virus’s origin isn’t original at all, it is timely, and that alone makes it scarier. There is a lot that Power gets wrong in this book, but the Tox virus definitely isn’t one of them.

It’s like that, with all of us here. Sick, strange, and we don’t know why. Things bursting out of us, bits missing and pieces sloughing off, and then we harden and smooth over.

Ok, let’s move on to the less successful aspects of the book.  Get comfortable because this will take a minute.  There are a few glaring issues with Girls, but one of the biggest is the pacing of the book.  The book starts off strong and throws you into the story with little explanation.  It’s disorienting, but it’s done in a purposeful way that sets the tone for the book.  This is a no nonsense survival world where no on truly understands what’s going on and everything is brutal.  That intensity doesn’t carry very far, however, and the middle of the book is a slog to get through.  Not only is fairly boring, it also doesn’t really lend anything to the plot or the story in general.  I found myself skimming and looking ahead to see how much more I had left to read, which we all know are signs of a boring book.  The few strong scenes were genuinely unsettling and well done, but they weren’t enough to carry a couple hundred pages.

The end of the book is much stronger and more interesting, but the book is far too back loaded.  The last twenty pages of the book were nothing but revelation information dumps that could have been spaced out to be the entire second half of the book.  It was too rushed, too full, and far too open ended.  This is being pitched as a stand alone, but that ending felt very much like a set up for a second book, which is incredibly aggravating.  Either that, or it’s just an unsatisfying and lame ending. Neither choice is a good one, and both are a detriment to the story as a whole. 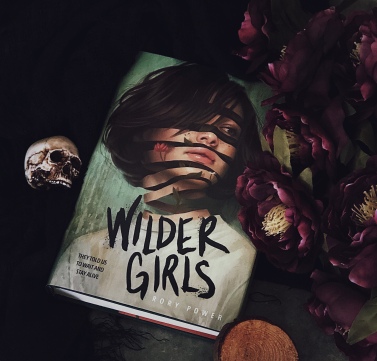 The second glaring issue with Girls are the characters or, to be more specific, the fact that I didn’t care about any of them.  This is a book where all of the characters are suffering through torturous pain and disfigurement, intense fear and hopelessness, and death…and I didn’t care at all.  That’s a big problem and the main reason that Girlsjust doesn’t work.  The book is mostly told from the MC’s perspective, and it is written in a direct and almost emotionless way that reflects how the MC feels.  It’s effective in that, as a reader, you understand immediately how detached and emotionally drained these characters have become in order to survive.  Unfortunately, it also works to make the reader feel totally unattached to the MC. This coupled with the fact that none of the characters are fleshed out at all—seriously, not at all—means that I just didn’t give a shit about these girls, and when the reader doesn’t care about the characters the book loses any sense of urgency, intensity, and, ultimately, interest.  The mystery of the illness was basically the only thing driving me to finish the book at all, and that’s a problem.

Some days it’s fine. Others it nearly breaks me. The emptiness of the horizon, and the hunger in my body, and how will we ever survive this if we can’t survive each other?

Overall, there just felt something off about this book, and it took me nearly the entire story to figure it out: it feels like a novella that went on too long.  The way the book is written, the lack of character development and world building, the intense beginning, the boring middle, and the too loaded ending would all work if the story was simply a long novella and not a full novel.  The tedious middle of the book wouldn’t be there to weigh whole thing down, and the lack of investment would make sense.  As a novella, this would be scary and visceral.  As a novel, it’s lackluster and tedious.  If Power wanted this book to be successful, it needed to have more investment and expansion in the world, the characters, and the emotions of the story. Oh, and a better damn ending.

According to Goodreads, Power already has a book slated for release in 2020, and I have a sneaking suspicion it will be a follow up to Girls. Whatever it is is largely irrelevant since I probably won’t be reading it either way.  It’s possible I’m being too hard on Girls; after all, this is a debut and there are some truly great aspects of it.  I think I’m still bitter that a book with a cover that stunning turned out to be such a disappointment.