Nita doesn’t murder supernatural beings and sell their body parts on the internet—her mother does that. Nita just dissects the bodies after they’ve been “acquired.” But when her mom brings home a live specimen, Nita decides she wants out — dissecting living people is a step too far.

But when she tries to save her mother’s victim, she ends up sold on the black market in his place — because Nita herself is a supernatural being. Now Nita is on the other side of the bars, and there is no line she won’t cross to escape and make sure no one can ever capture her again.

Nita did a good deed, and it cost her everything. Now she’s going to do a lot of bad deeds to get it all back.

When I first read the synopsis for Not Even Bones, the book instantly went to the top of my “most anticipated reads” list.  Here was a book that promised a dark, twisty tale that would delve into the deep reaches of morality where no one would come away unscathed. When New Book Tuesday finally came around, I was practically stalking my mailbox waiting for my lovely postal worker to deliver what I hoped to be an amazing read (that poor woman has to deal with a lot of packages on Tuesdays).  I was so thrilled to finally have it in my hands that I started it less than an hour later in the parent pick-up line at my oldest babe’s primary school.

Here is where I usually tell you that, despite everything I had heard and all of the build up, I ended being disappointed, and then I would spend the next 1500 words telling you why…but I’m not going to do that today.  But, Alexa, why won’t you be doing that today? Well, I’m glad you asked, and let me tell you why: This. Book. Delivered.  It is everything I had hoped it would be and even actually a bit more. Reading Not Even Bonesis an absolute delight.  It is a stay-up-past-my-bedtime, hide-in-the-car-after-I-get-home, late-to-class-because-I-have-to-finish-this-chapter kind of read.  It’s dark, twisty, compelling, addictive, and unapologetically pathologically fucked up in the best possible way.  Rebecca Schaffer, author of this delicious little tome, describes her book so perfectly that I’m just going to use her words, “I wrote this book for the people who watched movies as children and screamed, “why don’t you just kill the bad guy already???” For the people who watched heroes proselytize on screen and said, “It’s not that simple.” For the people who watched the villains with fascination and whispered softly, where the normal, good, proper people wouldn’t hear, “I want to see their story.”  This, my friends, is their story.

Possibly the most important tidbit to know before diving into this story is that there is no Lawful Good in the world that Schaffer has created, and there isn’t much respite either.  Schaffer presents her story free of sugar coating, frills, or anything else that might provide a bit of silver lining.  Bones goes to the dark places that YA so rarely treads, and then goes a little farther; thankfully, the darkness is done in such a way that it never feels gratuitous.  This isn’t Hostile-style torture porn (I hate that stuff, to be honest), but instead an urban fantasy that uses the supernatural to explore the parts of our own world that most of us rarely think about. Human trafficking is very real, very widespread, and truly one of the most atrocious and nightmarish parts of humanity.  To infuse this story, which revolves around a fantasy version of human trafficking, with any type of sweetener that would mollify the awfulness of the MC’s situation would be a disservice to her and to her story.

Nita closed her eyes and wished she had a scalpel and a dead body. What she wouldn’t give to be in her workroom, taking someone apart piece by piece.

Speaking of our titular MC, let me just say that Nita—a teenager recruited by her parents into the business of dissecting and selling unnatural body parts on the black market—is wonderfully fleshed out and so different from any YA protagonist that I’ve yet experienced. Schaffer doesn’t delve too far into the family dynamics, but even so it is clear that Nita has been mentally abused by her mother (which her father condones) and isolated to the point that she can’t remember having a true conversation with anyone except her parents in nearly a decade.  How this treatment has impacted Nita is deftly handled by Schaffer, and I desperately hope that she explores this more in the next installment.  I won’t say much more about any of the characters (no spoilers!) other than to say that Kovit is a joy to read about.  He’s absolutely fantastic and I need more of him in my life (well, not my life, that would be terrifying, but my reading life). This is how Nita describes him, “His (eyes) were black, iris and pupil, and seemed to go on forever.  It was like looking into a well leading deep into the earth.  You could fall in if you wanted, but at the bottom, there’d only be a painful landing followed by a slow, agonizing death.”  Ugh, it’s so good. 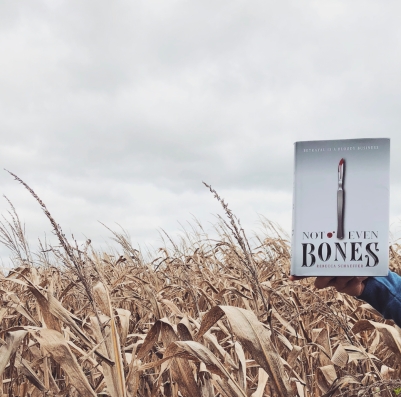 Wonderful characters are great, but without a proper stage for them to play on then the whole story is a wash.  Luckily, Schaffer’s world building is just as wonderful as her character development.  Schaffer’s world is rooted in our own and comes complete with all of the governmental departments and red tape that ours boasts as well.  Schaffer uses lesser-known mythical creatures to ensure Bones is an inclusive and global experience, while also reimaging popular Western creatures.  Schaffer also delves into the science of the unnaturals in her world by briefly explaining the genetics behind being an unnatural as well as their individual limitations.  No one in her world has unlimited powers, and so even the supernatural creatures feel grounded in realism.  The world that Schaffer creates is done in such a way that it seems like it could exist just below the surface of our own; a tricky prospect to be sure, but when done well (as it is here) it gives the story a fascinating morbidity that others lack.

These were the exploiters, the people who felt like they could come into a country and do whatever they wanted. Conquistadores in suits.

Finally, I want to say something briefly about the social commentary sprinkled throughout the book.  I’ve mentioned the horrors of human trafficking already, but Schaffer also doesn’t shy away from talking about other topics often avoided in Western culture, namely eugenics, Colonialism and American privilege.  Even though these issues (and their corresponding consequences) are on full display, the book never feels preachy.  Schaffer simply presents these things for what they are and leaves it to the reader to feel what they are going to feel.  It’s nicely done and, like so much of this book, I hope she continues this vein in the next installment.

I really could go on and on about Bones, but instead I’ll just do a quick run down of a few other things that I loved:  a female MC that loves science, the medical/physiological breakdown of Nita’s power, twists that are actually twisty and still realistic, the ending, unapologetic characters, and NO YA TROPES—seriously, there is no instalove, no MC falling apart because of a boys eyes (gag me), no misunderstood chosen one…it’s so great.

Stories here didn’t get neat endings tied up in a bow.

In case you haven’t figured it out yet, let me be clear:  I love this book, and I cannot recommend it enough.  Rebecca Schaffer’s debut is morbid, enthralling, and unashamedly warped.  In Bones, Schaffer has managed to create a fantasy world that is as realistic and grimy as our own.  Her biting social commentary is refreshingly unambiguous, and I can only hope that it is setting up a much bigger story arc.  The second book doesn’t yet have a release date, so I’m left with only my hope that it will be soon and my faith that it will be just as amazing.